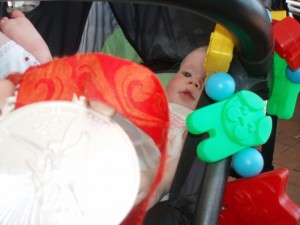 This is about the closest I will ever get to Olympic glory.

It’s a silver medal from the Beijing Olympics which a friend of mine won. We got to have a hold under a table at  my school’s 10 year reunion, where they didn’t want it to be obvious and so I snuck out my camera and got this little snap of the medal with my daughter Amelie when she was a baby.

It was an interesting time being at the reunion, hearing about what everyone had been up to. But being right on the back of the Beijing games, it was easy to work out who had the most glorious story to tell.

My school agreed as well, my friend had been given the royal treatment. They had them return to the school and speak at assembly. What a tremendous role model they were for the the students and it was a great success for the school also.

Yet at the reunion I spoke with another student who had also been a very good athlete, who had also won a number of prominent poetry awards while we were at school and so I was interested to hear their story. Perhaps lecturing at a university on the back of their literary skills or heading up some company in one of the Australian cities. I mean who knows what story they might tell, they were athletic, bright and attractive.

In some ways it came as a bit of a surprise, to hear they were working in community development in Northern Australia. This was a long way from city life or the sandstone buildings of a university and even further away from the thrill of Olympic glory.

I came away from the reunion thinking what a shame my Christian school didn’t invite them to speak to the school assembly as well. I mean the acts of sacrifice this student had made to work in this way would have to be a tremendous role model for the students and been a great success for the school also. But I guess they, like me, just wouldn’t consider that work, when compared to Olympic success, very glorious. Even though this student could have achieved great success in the world’s eyes in a variety of areas – sport, the arts or big business – they gave that up to help others.

So I shouldn’t be surprised when the world doesn’t think Jesus is very glorious either. Yet he didn’t just give up a career in athletics or in academia or business. Jesus actually had everything! He was king of heaven but gave it up, not just to help others, but to save them. Have a listen to how the apostle Paul describe the sacrifice of Jesus:

Who, being in very nature God, did not consider equality with God something to be grasped,
but made himself nothing, taking the very nature of a servant, being made in human likeness.
And being found in appearance as a man, he humbled himself and became obedient to death — even death on a cross!

Now that is truly glorious. Are you going for glory?

2 comments on “Going for glory”