The “New” NIV at Southern Cross 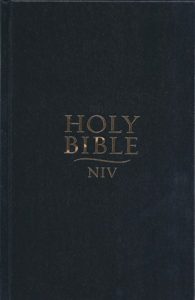 This weekend you may notice a small but significant change when you arrive for the Sunday Gathering. The Bibles on the welcoming table will be new. In fact, not only will they be new Bibles, they’ll be a different version to the one we’ve been using for the last 20 years or so at Southern Cross, which is commonly known as the 1984 edition of the New International Version, or the NIV’84 for short.

The main reason we’ve changed Bible Versions is because the ’84 NIV has been out of print for a few years now, superseded by the 2011 NIV. As our stock of NIV’84s gradually got older and worn out, a decision had to be made. There are a bunch of pretty good Bible Versions around at the moment, several of which weren’t around back in 1984. Versions like the English Standard Version (ESV), the Holman Christian Standard Bible (HCSB) and the New Living Translation (NLT) all have their merits and none of them would have been a bad choice. But in the end we decided to go with the NIV2011 for one over-riding reason – it’s the closest to what most of us are familiar with, the NIV’84. In other words, we wanted to minimise the impact of a new version when it comes to messing with the Bible that most of us have in our heads and our hearts.

In fact, the vast majority of the changes between the NIV’84 and the NIV2011 are actually the result of just one choice. That choice was to move to using “gender inclusive” language wherever possible without changing the intended meaning of the text. In other words, where the NIV’84 used “man” or male pronouns, reflecting the gender of the original text, the NIV2011 uses more “gender inclusive” terms such as “person” or neuter pronouns. Here’s an example from this week’s passage:

NIV2011: “The true light that gives light to everyone was coming into the world” (John 1:9)

It’s clear that in both these examples the original male references to “men” and “man” were intended to be inclusive. That’s why the 2011 version makes this inclusiveness explicit, in order to overcome any perceived bias or prejudice that could cause a stumbling block.

The flipside is also true – that wherever it was deemed important to RETAIN a reference to a particular gender in order to communicate the true meaning of the passage this has been done. For example specific people are still referred to as their actual gender, e.g. Jesus is till the SON (not “the child”!) and the Father is still the FATHER (not “the parent”!) and both (along with the Spirit!) are still referred to as “HE”.

So as you can see, the gender inclusive decision is not a case of “political correctness gone mad”, but rather a loving response to cultural shifts and changes in how language is used. The goal of providing an accurate, accessible version of the Bible in modern English remains the same.

In addition to the changes made on the basis of gender inclusion, there are many other differences between the NIV’84 and the NIV2011 but not so many that the Bible becomes unfamiliar.

In fact in this week’s passage there are only two other differences:

NIV’84: “The light shines in the darkness, but the darkness has not understood it.” (John 1:5)

NIV’84: From the fullness of his grace, we have all received one blessing after another.” (John 1:16)

NIV2011: Out of his fullness we have all received grace in place of grace already given.” (John 1:16)

I won’t go into detail about the merits of these two changes (except to say that the first is a 50/50 and the second is an improvement), because the main point I want to make is that there are only 2 changes in 18 verses. Almost 90% of the passage remains unchanged, which in my book is a great thing!

If you’d like to look into all of this further, you might want to check out this link which is an 11-page explanation by the NIV “Committee on Bible Translation”, the group who oversee any changes made to the NIV.

If you’ve read this far, I hope you’ve found it a helpful explanation of why we’ve opted for the NIV2011 as the Bible we read in our gatherings at Southern Cross.