9 Things You Should Know About The Rwandan Genocide

This week marks the twentieth anniversary of the beginning of the campaign of genocide in Rwanda. Here are nine things you should know about one of the most horrific seasons of slaughter in modern times: 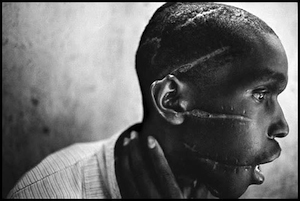 1. The Rwandan Genocide was a genocidal mass slaughter of Tutsi and moderate Hutu in Rwanda by members of the Hutu majority. During the approximate 100-day period from April 7, 1994 to mid-July an estimated 800,000 Rwandans were killed, constituting as much as 20 percent of the country’s total population and 70 percent of the Tutsi then living in Rwanda.

2. The Hutu (also Abahutu) are a Central African ethnic group while the Tutsi (also Abatutsi or Watutsi) are an East African ethnic group. The two groups intermarried for decades prior to the genocide which has lead to an ongoing debate about whether they can truly be considered two separate and distinct groups.

3. The inciting event appears to have occurred on April 6, 1994 when an airplane carrying Rwandan president Juvénal Habyarimana and Burundian president Cyprien Ntaryamira was shot down on its descent into the Rwandan capital. Genocidal killings began the following day as soldiers, police, and militia executed key Tutsi and moderate Hutu leaders, then erected checkpoints and barricades and used Rwandans’ national identity cards to systematically verify their ethnicity and kill Tutsi.

4. In rural areas, the local government hierarchy served as the chain of command for the execution of the genocide. The governor of each province disseminated instructions to the district leaders, who in turn issued directions to leaders within their districts. The majority of the actual killings in the countryside were carried out by ordinary civilians, under orders from the leaders. Tutsi and Hutu lived side by side in their villages, and families all knew each other, making it easy for Hutu to identify and target their Tutsi neighbors. Historian Gerard Prunier ascribes this mass complicity of the population to a combination of the “democratic majority” ideology, in which Hutu had been taught to regard Tutsi as dangerous enemies, the culture of unbending obedience to authority, and the duress factor – villagers who refused to carry out orders to kill were often branded as Tutsi sympathizers and killed themselves.

6. An estimated 200,000 people participated in the perpetration of the genocide. Participants were given incentives, in the form of money, food, or land, to kill their Tutsi neighbors. Hutu were allowed to appropriate the land of the Tutsis they killed.

7. Local Rwandan radios would use propaganda to incite Hutus to violence. Broadcasts included such statements as, “You have to kill the Tutsis, they’re cockroaches. We must all fight the Tutsis. We must finish with them, exterminate them, sweep them from the whole country. There must be no refuge for them.”

8. Most of the murder was done with machetes (in 1993 Rwanda imported three-quarters of a million dollars’ worth of machetes from China), but automatic weapons and hand grenades were also used.

9. The U.S. was reluctant to get involved in the “local conflict” in Rwanda and initially refused to label the killings as “genocide.” Then-president Bill Clinton later publicly regretted that decision in a television interview. Five years later, Clinton stated that he believed that if he had sent 5,000 U.S. peacekeepers, more than 500,000 lives could have been saved.