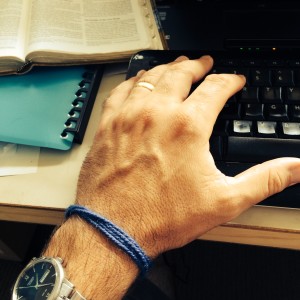 One of the guys in my GC is going to have a baby soon – first time. He knows its a big deal. He knows he needs help. And he also knows that God’s designed us for life in community. So he wants this big deal to him to be a big deal to us too.

To help us get involved he had a bunch of men over – young and old, Dads & not, from our GC & others – to offer advice, pledge our commitment and pray for him, his wife & his baby. The blue string on my wrist is a reminder to keep praying and doing whatever I can to love him as a brother and to walk beside him in the awesome adventure of Fatherhood.

I suspect that if you’re a woman reading this you might think.”So… you had a sort-of ‘baby shower’ – what’s the big deal?” Well, the funny thing is, for some reason (at least as far as I’m aware) this sort of thing just isn’t something men do. I’m not sure why. But one possible reason is that men aren’t very good at community because we’re not very good at humility. We’re not very good at asking for help.

Last night was nothing spectacular, but it was pretty real and pretty rich. And it only happened because my friend was humble enough to admit his frailty and reach out for help. I wonder if we miss out on many of God’s richest blessings just because we’re too proud to ask for each other’s help.