Hmmmm… well, I’m no architect, or builder or stonemason, or even interior decorator but even still, all that detail in the temple that Solomon built for God – it’s pretty impressive – especially when you consider it was made without power tools! 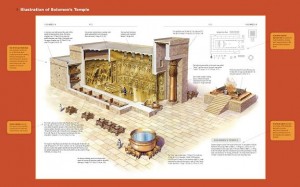 But once again, what does it all mean?

Well, I think the first thing we’ve got to understand is that there’s a lot of symbolism involved. Remember from 2 Sam 7 that David had wanted to build a temple, a “house” for God but God had said No – it would be built by David’s son. But also remember that before anyone built a house for God, God promised that he would build a “house” for David – a family line that would always have a king on the throne of Israel. In allowing Solomon to become king, God in the process of fulfilling his promise to David and now he is ready for David’s son, to “build a house for my name”. The temple reflected the peace and prosperity of Israel under Solomon. It was grand in every way – a fitting centre for the worship of the one true God. It was also built on a hill in the centre of the city to symbolise the centrality of God to life of the nation and to be a constant physical/visual reminder of his rule. The glory of the temple was designed to reflect God’s glory but it was also very functional – the massive “sea” and basins to be used in the offering of sacrifices that would occur daily under the old testament covenant. And then of course there was the most holy place, where the ark was to rest and God was to “dwell”. But even here we have to be careful to remember that God doesn’t need a “house” as it were and though he chose to dwell in some sense in the temple, he was not restricted by it or absent from the rest of his creation (see Acts 17:25).

But, having said that, one of the most amazing things about God is that he has always desired to live with his people. That was how things were in the beginning and it is how they will be in the end, it’s how it was when Jesus walked the earth and it’s how it is even NOW for all those who live under Jesus as Lord and so have received the awesome gift of God’s Holy Spirit. The temple Solomon built was impressive, but the temple that God is building to last an eternity is so much more amazing. Praise God that we quite literally get to be a part of it!