The Bushfires: a Taste of “Hell”? 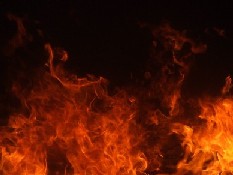 One thing that really struck me in the media wave that hit in the aftermath of the Victorian bushfires was the number of times in headlines and on the lips of residents and firefighters and politicians the fires were described in terms of “hell”.

The PM himself was probably the most-quoted saying: “Hell and all its fury has been visited upon the good people of Victoria in the last 24 hours.” All this talk about hell got me thinking – what does your average Aussie think about hell? What do they understand and where do they get it wrong? Clearly, the one thing that everyone who has witnessed the devastation of the recent fires seems to know is that hell is something terrible – it will arrive unexpectedly, take away every good thing and leave a trail of despair and suffering in its wake. Neither does it discriminate between the “good” and the “bad”. All of these aspects make “hell” a good way to describe the recent bushfires.

But there’s one huge difference between the recent events in Victoria and the hell that awaits all who fail to accept the free gift of forgiveness and salvation God offers us in Jesus – and that’s the finality of it all. In the end, no-one will really be able to say “I’ve been to hell and back”. And hell will last an awful lot longer than the 24 hours PM Kevin referred to. There will be no talk of “rebuilding”, or “hazard reduction” once judgment day arrives. There will be no “relief effort” or “community spirit” because it’ll be too late. All the good things, including God himself will be taken away and that’s an existence too horrible to comprehend.

Why am I writing all this? Because hell is real. In some ways, the bushfires were a taste of it. And what a horrible taste. But the reality is even worse. Yes even worse. So I’m writing to warn people to flee to the only safe place – to Jesus and to an eternity that is as glorious as hell is terrible.